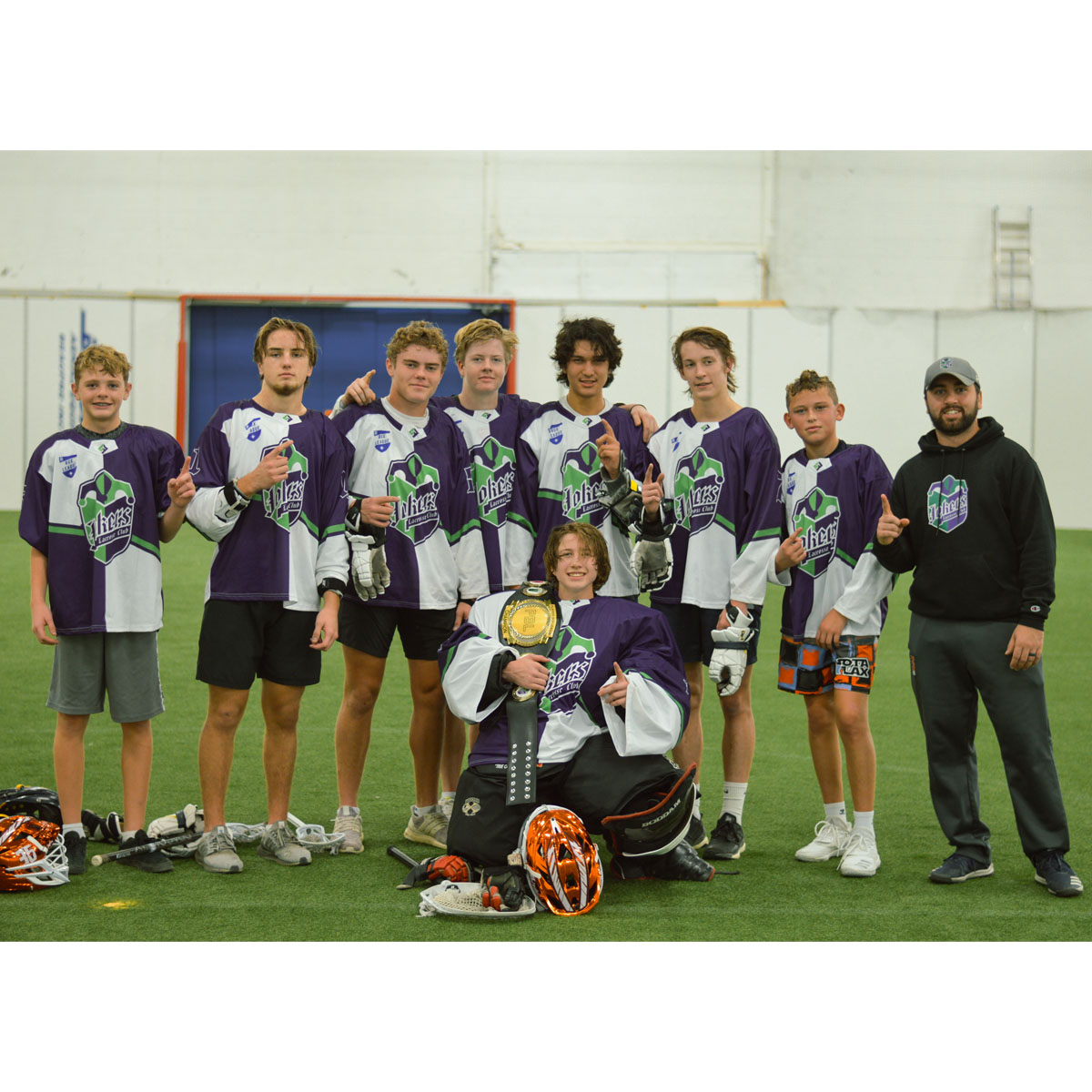 Well folks, that’s a wrap on another year of the Player’s Box League. This year gave us an undefeated team, competitive games, and great talent up and down the rink. Huge shootout to the players, the fans, the coaches, and of course, 1st Athlete.

Now that we have reached the end of the year, the time has come for the end of the reviews. Some teams will be pleased with how the year turned out; others will surely hope to use the reset button after this year, and hope to bounce back stronger in year four.

First and foremost must be the 2021 PBL Champions, the Jokers LC. Head Coach Austin Polson-McCannonand assistant Luke Bloedow led the Jokers to a very strong undefeated campaign, capped off by bringing the coveted belt back to the Jokers Lacrosse Club.

Justin Simonson (Prior Lake HS ‘22, Merryville ‘26) helped lead the Jokers the entire year. The strong lefty from PL displayed a creative play style complemented by an eagerness to share the ball with his teammates. Coach Polson-McCannon loved Simonson’s “ability to open the field by occupying his defender. When a player like him gets on the field, defenses gravitate towards him, allowing other players to get involved.”

The Jokers LC dominated in the Championship game, winning 15-9 over Venom LC. What started as a close game in the first period quickly turned into a blow out as the Jokers went on a 6 goal run early in the second.

After what may be the strongest year from any franchise in the PBL, the Jokers LC will look to continue their success in year four. Rumors are spreading that a dynasty is in the making.

Venom may be the most confusing team in the PBL. After a decent start to the season, going 1-1 in Week 1, Venom dropped two games in Week 2 for a 1-3 regular season record. This had everyone thinking the Spiders would be able to walk in the Championship game. Then, Venom shocked the league with a strong semi-final game to secure a spot in the Championship. Unfortunately, likely due to the back to back schedule, Venom lost in a blow out to the Jokers.

Tyler Kloeckl (Farmington ‘22, Utah ‘26) clearly stood out for Venom. The dynamic midfielder put out highlight play after highlight play in the semi-final game to help Venom reach the championship. Head Coach Jeremy Goltz believed Tyler’s behind the back goal to seal the victory over the Spiders “was easily in the top 5 all time for greatest goals in the PBL.” If you would like to see Tyler’s goal, and many others, check out our end of the year highlight tapes.

Despite the poor record, Venom made it to the PBL Championship and finished the year in second place. Venom certainly hope to continue to build on a mostly positive season, and will look to be the poison that can take down the Jokers in year four.

The Spiders LC possibly brought the biggest let down of the year. After a strong 2020 campaign, finishing second in the league, the Spiders finished the 2021 season in last place.

After coming out to an early lead in the semi-finals against Venom, the Spiders were never able to pull away. Venom eventually tied the game late, only to score three more in a row to seal the game. Head Coach Parker Hill supported his players and “[took] the blame for the loss. The  team was not prepared how [Coach Hill] wanted and that starts with [him].”

Midfielder Keller Gonyea (Prior Lake ‘22, Merryville ‘26) was lethal around the crease for the Spiders. The senior seemed to always find a way to get his hands free right on the doorstep and bury. “That in your face play style is a good way to let your opponent know you mean business,” said Coach Hill.

Spiders LC will look to return to the former glory days in year four. The franchise has been on a two year skid after winning it all in year one. The good news for the Spiders, it is hard to be worse than last place next year.

Thank you to everyone who has supported the PBL over these last three years! Without the enthusiastic support of the players and the fans, we would not have the same success. Be on the lookout for future updates on the league, and we cannot wait to get back out there next season in year four.